Early in my training at the Serious Organised Crime Agency (now the National Crime Agency, NCA), my colleagues and I shuffled into a classroom for a presentation on an old case – the 1975 murder of Lesley Molseed. That morning, however, was not about the case’s tragic victim, but about its tragic conviction. Stefan Kiszko, convicted of Lesley’s murder, was innocent – and some refer to it as the ‘worst miscarriage of justice of all time.’

The horror of the Kiszko case presents a litany of police and legal failures that resulted in an innocent and vulnerable man going to prison for 16 years, where he was physically assaulted, became mentally unwell and died soon after his eventual release. Its inclusion in our training was to help us appreciate the importance of getting investigation right – particularly the boring bits. And it worked; as some of my later colleagues would grumblingly attest, my passion for investigative detail, precision and order has burned ever since. 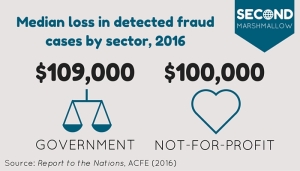 Scarce resources make it even more important to steer clear of avoidable mistakes. Recently, the ACFE’s regular study of detected fraud worldwide reported similarities in losses between government and not-for-profit organisations – and yet while government departments might enjoy considerable investigative resources, this is often not the case for NGOs. In this article, then, we’ll explore (in no particular order) some common errors that can help turn NGO fraud and corruption investigations into a ‘kangaroo court‘. In all cases, of course, local legal advice should be sought. 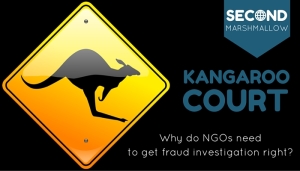 In my home country, there’s a great TV show called Midsomer Murders. Each week, the dogged detective wanders around an English countryside village chatting to people about a murder, and – after just over an hour – confronts the suspect (who, naturally, confesses in full). Roll credits.

In real life, an internal investigation of fraud or corruption is not like that. It is best thought of as a project which builds a corpus of robust material that can be used to inform decisions that manage risk and improve organisational resilience. It also a project which creates risks as well as minimising existing ones. It takes time, and care, and caution.

Humanitarian or development programmes are often under considerable pressure, but failing to allocate sufficient time to an investigation can mean missed evidential opportunities, employment (or even human) rights abuses, severe damage to trust in the workplace, and inaccurate ‘lessons learned’. In short, rushing an investigation is a false economy.

Not having or following our own policies and procedures

This includes failing to have and apply lawful and proportionate performance management and disciplinary policies and procedures, internal suspicion reporting systems, and external reporting mechanisms (for example, to regulators). This exposes programmes to an array of risks, including confused or inconvenienced stakeholders, invalidated insurance, and accusations of bias (with the subsequent legal action). Being shown to have failed to follow your agency’s own protocols can be a rapid way to lose a case involving a former employee.

Expecting an inappropriate burden of proof 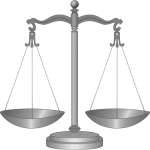 In some country contexts – especially conflict zones and fragile states – a criminal justice outcome for a case of employee fraud or corruption may be very unlikely for an NGO. While we should usually proceed with the intent to take a case to court, we must recognise that sometimes a disciplinary outcome (such as dismissal) has to be enough.

Generally speaking, the weight of evidence required in a disciplinary hearing is lower than that required to convict someone of a criminal offence in a court – and yet NGO disciplinary panels may erroneously expect that heavier burden. Critical concepts like ‘burden of proof’ and ‘circumstantial’ or ‘direct’ evidence might not always be well understood by such panels.

This can mean that NGOs fail to apply the correct sanctions, which can damage the trust of whistleblowers and keep dishonest people inside our organisations (or conversely, punish the wrong people). Ensure that you seek local legal advice.

It is easy to see why implementing partners might want to carefully manage what their donors see and how it is framed. Many donors seem increasingly risk-averse, and have a history of unhelpful, disproportionate reactions.

The problem is that this creates a vicious circle; low transparency generates heightened suspicion, and heightened suspicion elevates the likelihood of strong reactions. These might include suspended disbursements, parades of reviews that trample evidence into worthlessness, and onerous emergency controls that strangle programming. It also undermines the NGO’s internal culture of transparency and accountability – how can managers ask their staff to model these values if they do not do so themselves with donors?

Instead, honesty with donors enables them to appreciate the challenging contexts in which their projects are being implemented, heightens their trust of an NGO’s systems to prevent and detect corruption, contributes to our own internal anti-corruption cultures, and may enable us to access more investigative or audit resources through the donor.

An internal investigation is a serious undertaking that manages a dizzying array of risks to people, the organisation, and itself. Lives have been threatened in the course of such activities. If dedicated staff are not to be used, then NGOs, charities and nonprofits should invest in proper training and development for those charged with investigations, or use third party providers. These things are not luxuries, but part of the cost of working in the modern world. 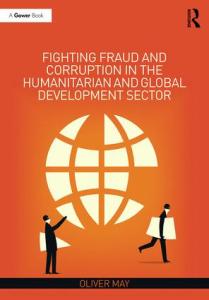 View all posts by Admin

2 thoughts on “Kangaroo court: Why do NGOs need to get fraud investigation right?”